Home Meeting St East Bay Drum Island Mt. PLeasant Pearman Stories Grace Stories Implosions Enginnering Insights Stories of unbuilders Learning Links Bridge Video Bridge Blog Unbuilding Archive All Unbuilding Segments Building the Ravenel Bridge Photo Essays About me
February 14, 2006: Implosion of the D-25 sub-structure
Earlier, we saw Mickey and Ken wearing blue gloves to avoid the possible absorption of nitroglycerin and about the medical uses of nitroglycerin. I used to get migraine headaches within 48 hours of each examination period when I was a university student and used cafergot, a derivative of ergot, to abort the headache. Since age 45 (more or less), I have only had 1 serious migraine headache, though from time to time I have experienced some of the early prelude symptoms which triggers a "drink a coke" response - so that the caffeine in coke will constrict my arteries enough to abort a migraine, one of the positive benefits of the aging process..

This was not an ordinary blasting day with Mickey and the Advanced Blasting Service team. First, they were loading dynamite to implode a bridge pier substructure that was partially underwater at high tide. This required to 1: wait for the tide to start going out before loading, 2: blowing out the 36' deep holes where the dynamite would be loaded and then sequencing the blast such that the structure imploded with minimal scatter of debris. In addition, this was Dennis's 2nd day with Mickey's team - and all rookies have the honor of clearing each hole of water. This is accomplished by using a blow tube connected to an air compressor - then turning up the air pressure and blowing the water out. Because the result is somewhat unpredictable, I call this the unfaithful geyser approach. Anyway, Dennis survived the day - and finshed with a smile. To emphasize this, Junior and Kerry and Silas and, I think, Felix were not only helping but were Dennis's cheerleaders! 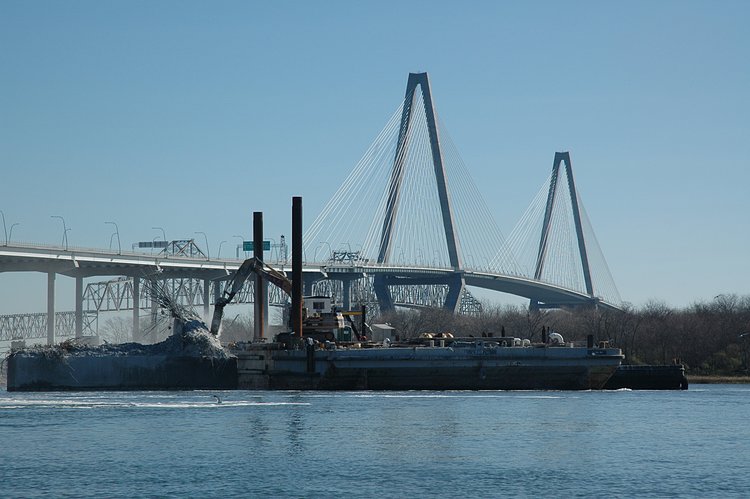 The last photo of the Grace cantilever section 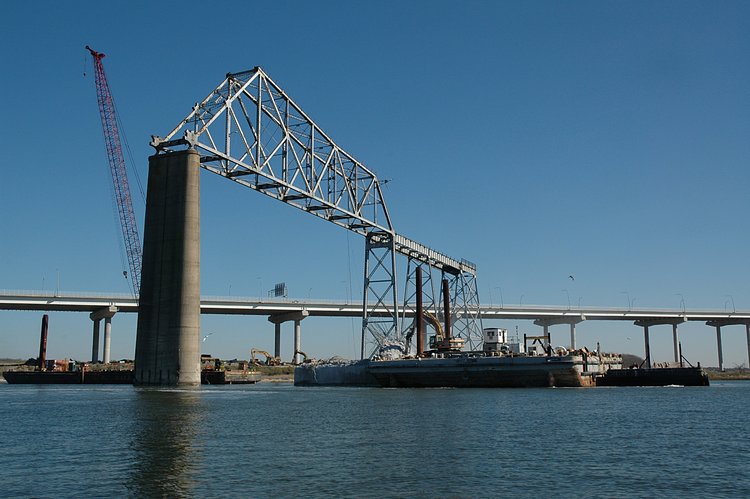 Mickey's team is loading the D-25 substructure for implosion. Here we are approaching them from the south 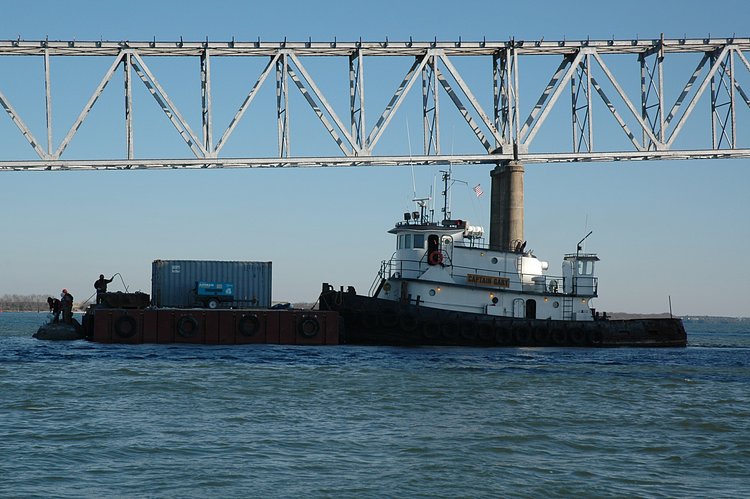 But Cashman-Testa is a multiprocessing organization. Behind us (looking east), they with Mammoet were installing the platforms that will hold the hydraulic jacks for lowering the main spans of the Grace and Pearman Bridges. 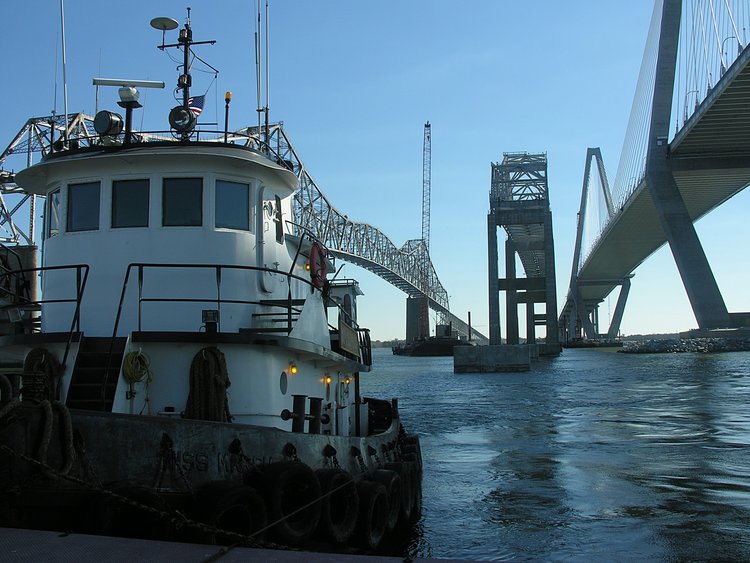 The challenge for today was blowing water out of the holes that were below the high tide level. Old Unfaithful displayed two modes: massive water tower and spary. Dennis holding the hole - and waiting, Junior watching and knowing with complete precision, what will happen next. 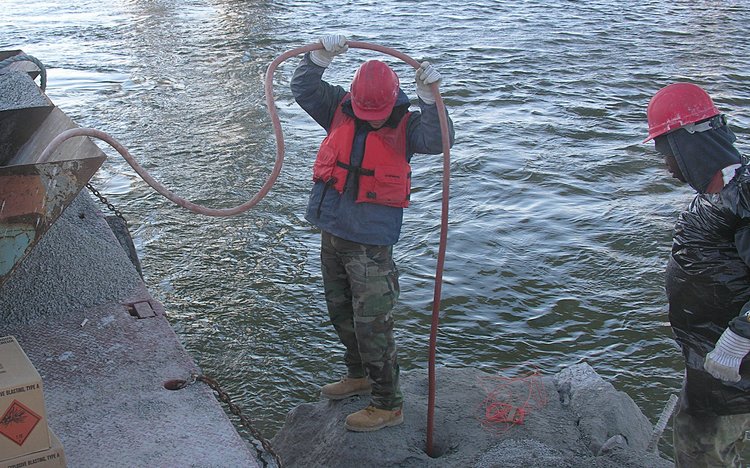 A view of Old Unfaithful in Massive Water ejection mode. Ken is not watching, Junior is holding the hose and Dennis, our rookie, being baptized by the Cooper River water. 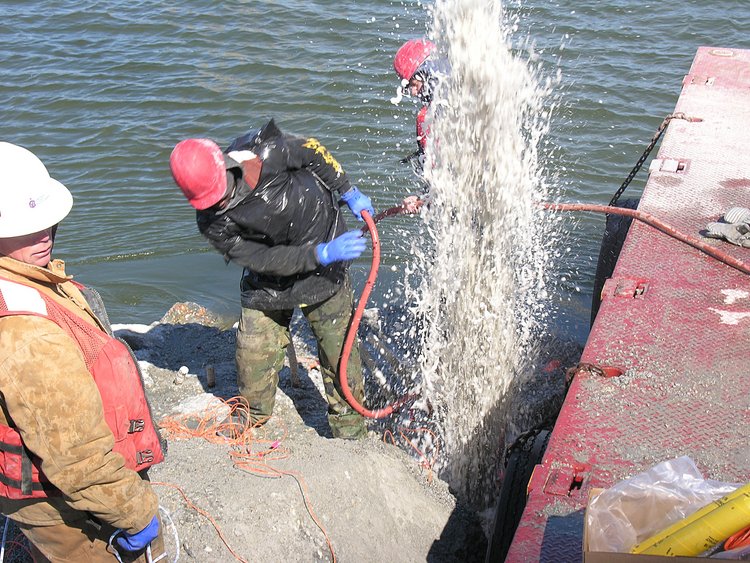 The spray mode of Old Unfaithful 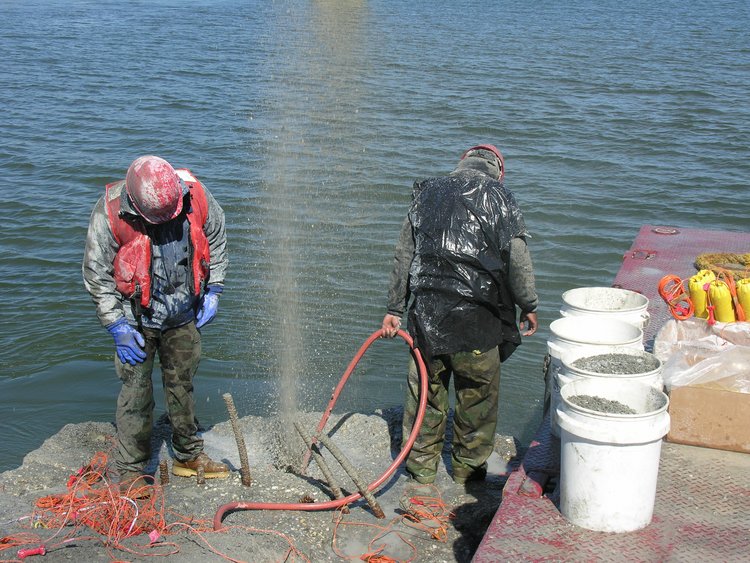 We did serious science - and discovered another mode: Droplet mode 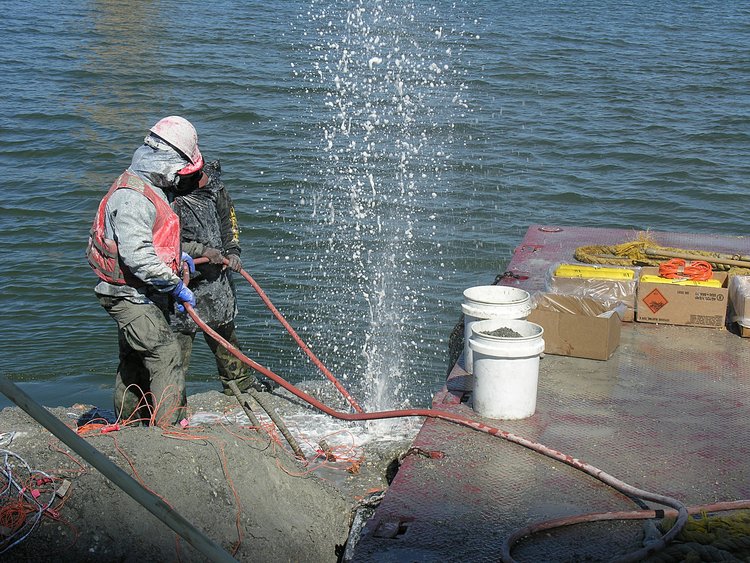 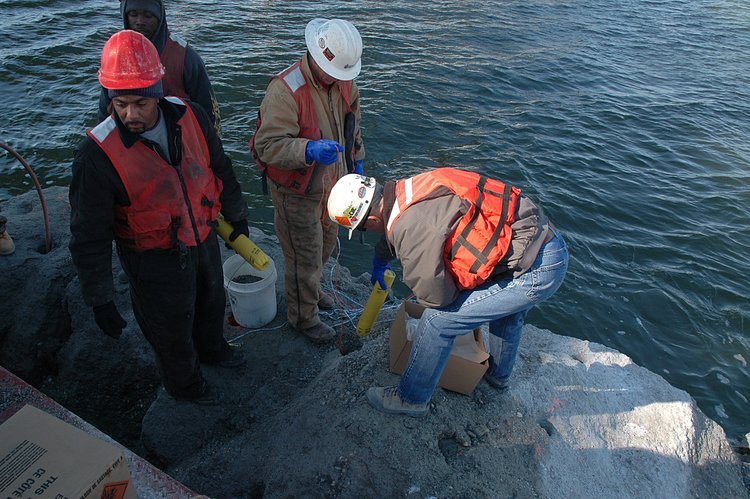 The shock tube array for sequencing the ignition - outside starting at each end and then 9 msec later, the center tubes are ignited. 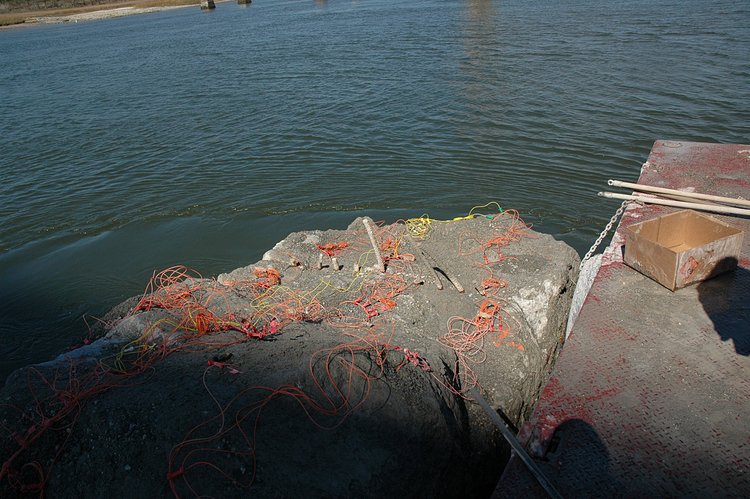 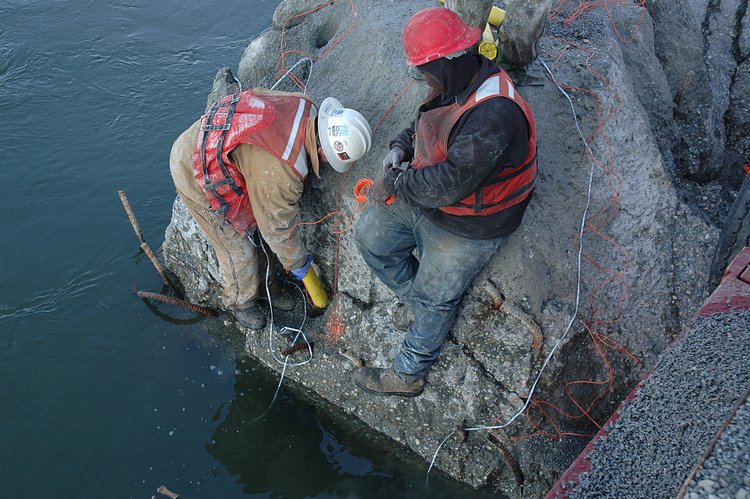 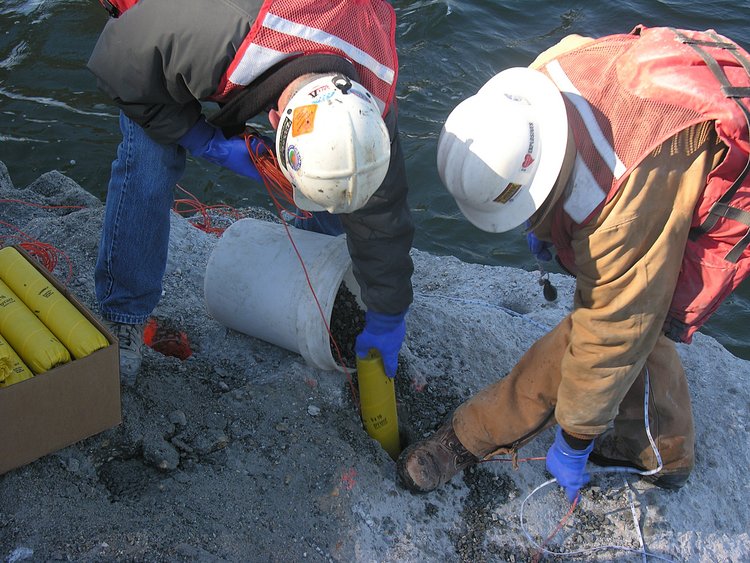 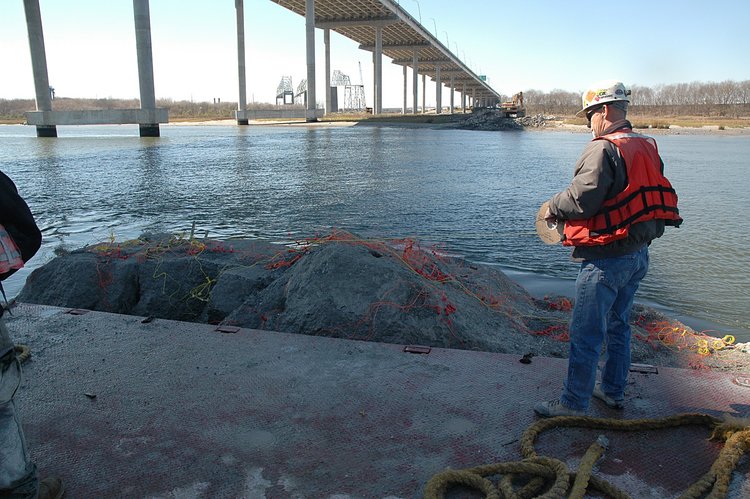 The receiver setup that will trigger the shock tube 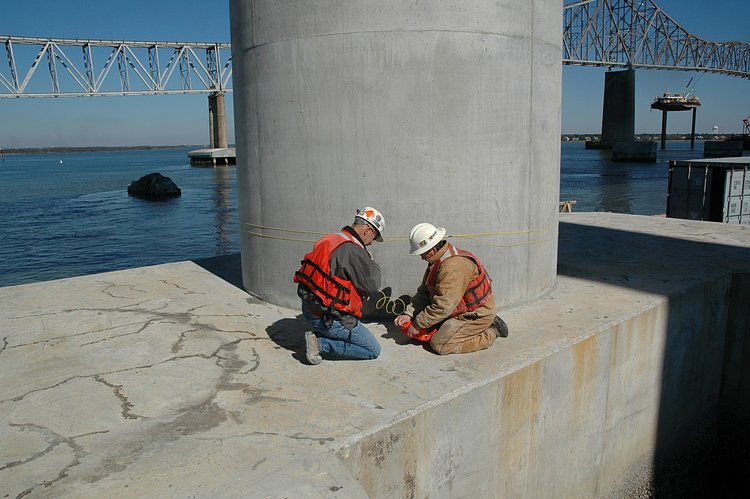 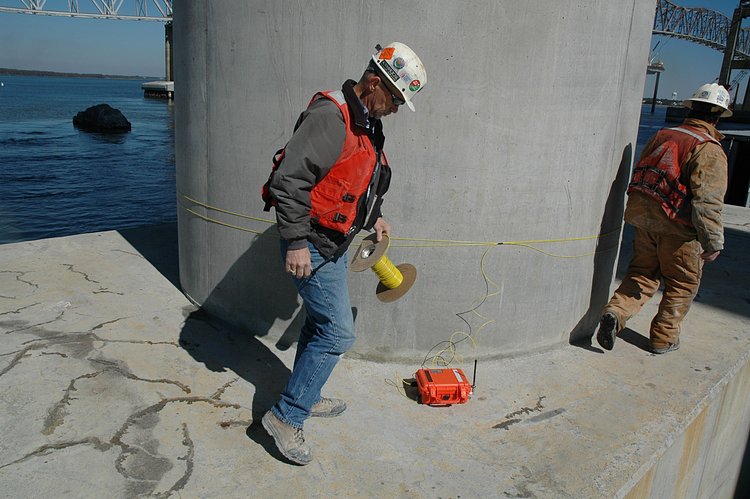 Pulling away on the barge and tug 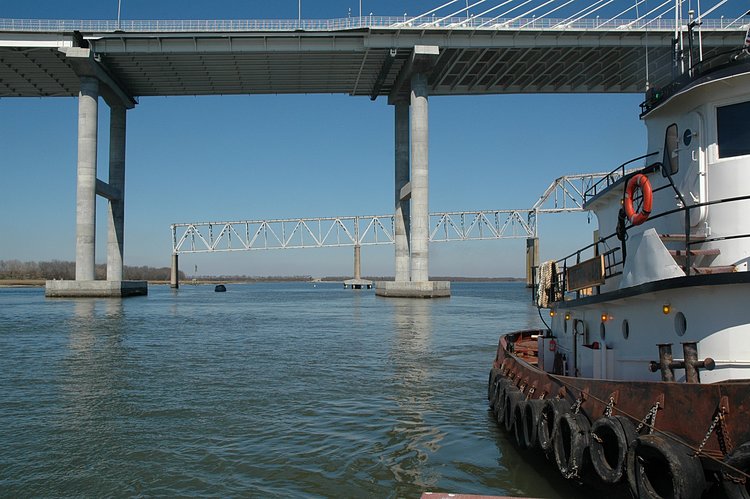 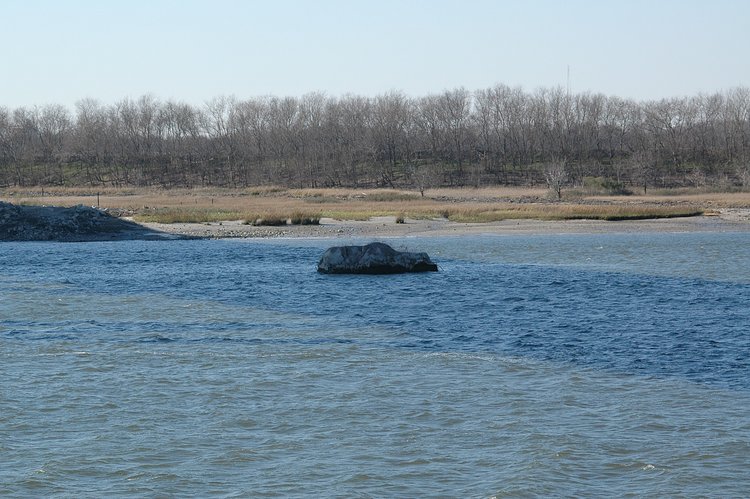 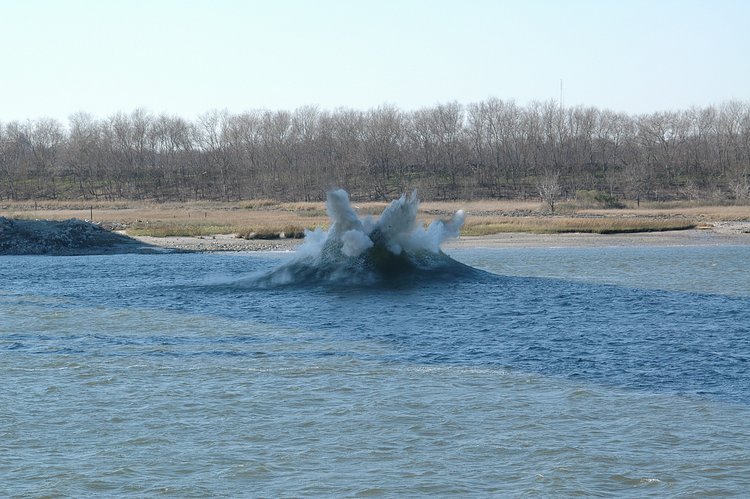 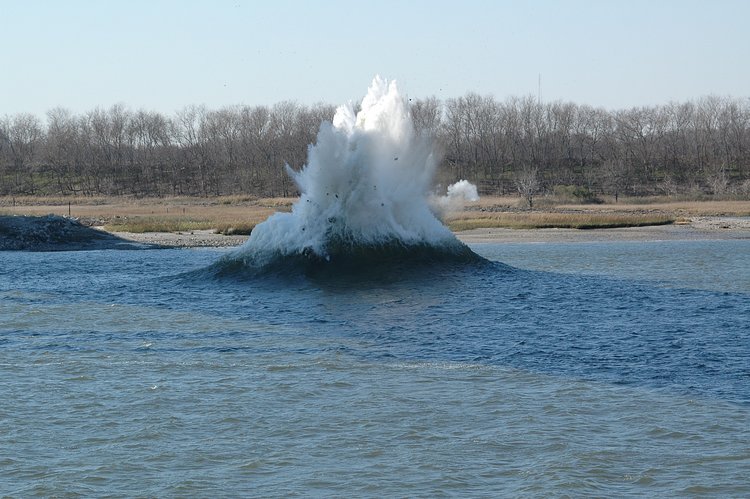 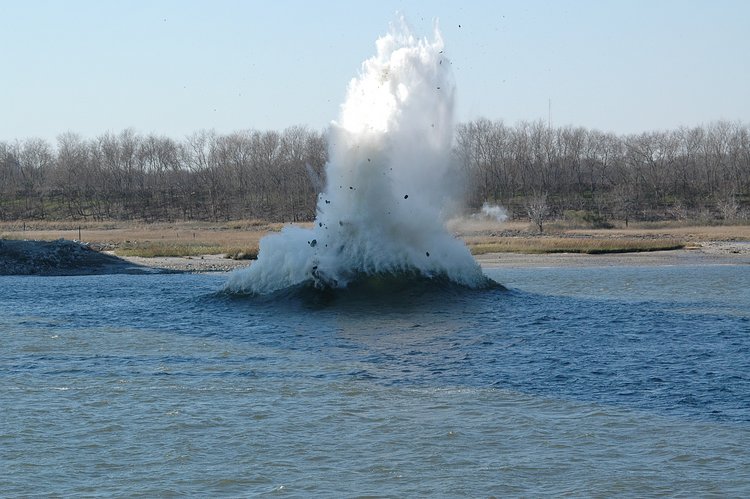 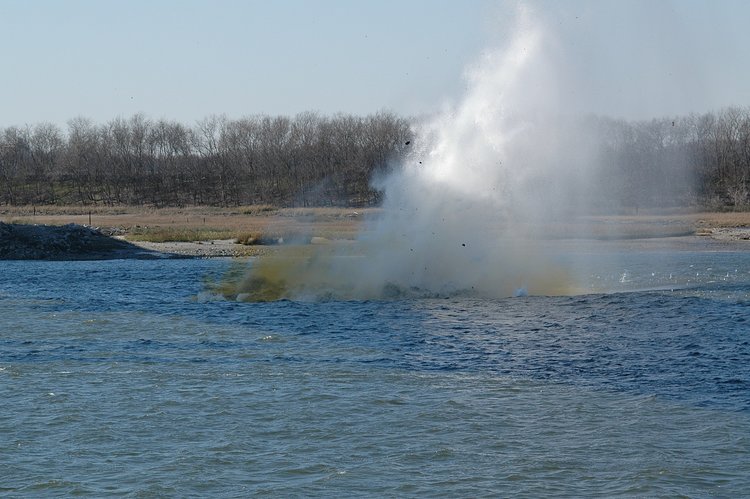 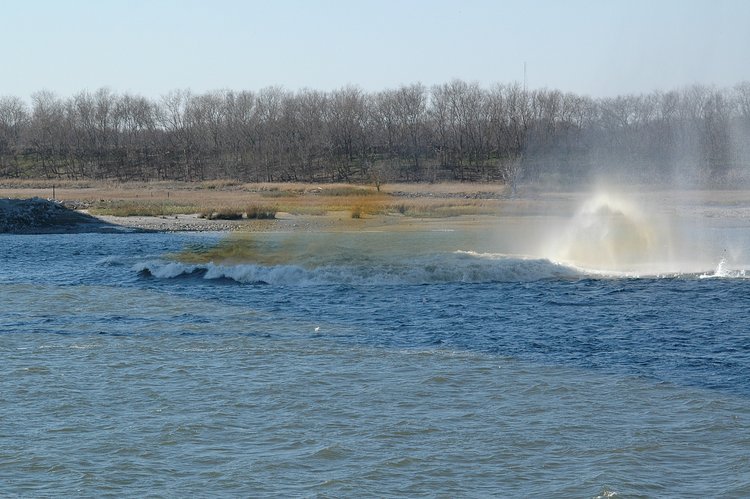 and all is calm 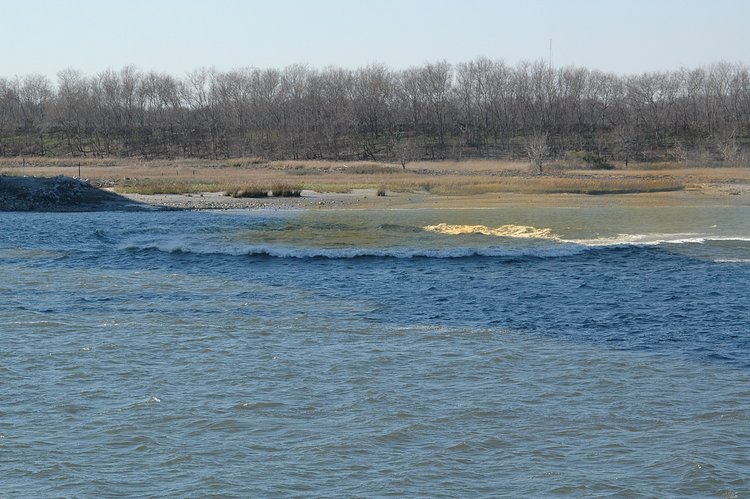 Returning to the Sea Breeze - with Mike Naley (left), Derek Jost and some of the new Mammoet team (behind me) that are preparing the Grace and Pearman main spans for lowering by hydraulic jacks 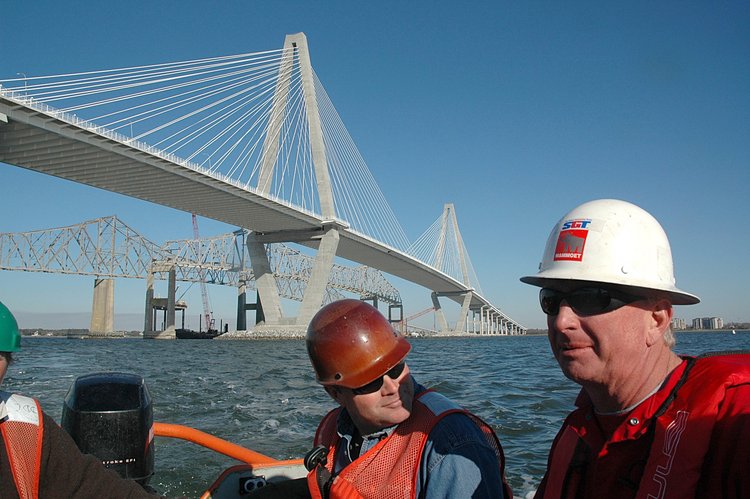 and of course - Sharon 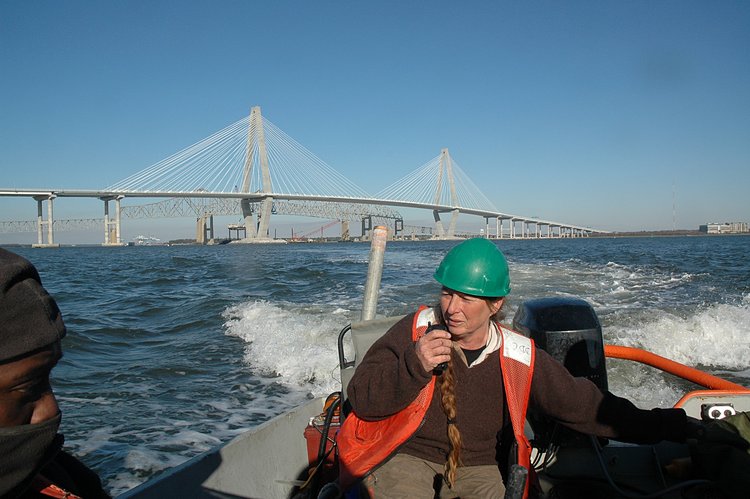 Meanwhile, Michael Hebb (for Joshua) is working under the direction of Jim Grier on Drum island - more cleanup - just like Leon and Roy at the Coleman Recycle center. Some folks have wondered what it is between me, Jackie Foley and Michael Hebb. When I started this project, I met them both - at different places. Unfortunately, I mislabeled their photos - you know the problem, all thoses Testa guys look alike with the orange t-shirts or orange jackets. The only difference was Jackie wore reflective sun glasses and Mike did not. But Joshua, Michael's son, printed the photos and took them so school to show the others what his dad did. When he looked carefully, he discovered that the man in the photo was not his dad at all, but Jackie. Joshua's mom, Tina, wrote me and explained the situation. That started the beginning of a wonderful triangle friendship that has increased to a quadralateral and then a pentagonal friendship and it is increasing each day. 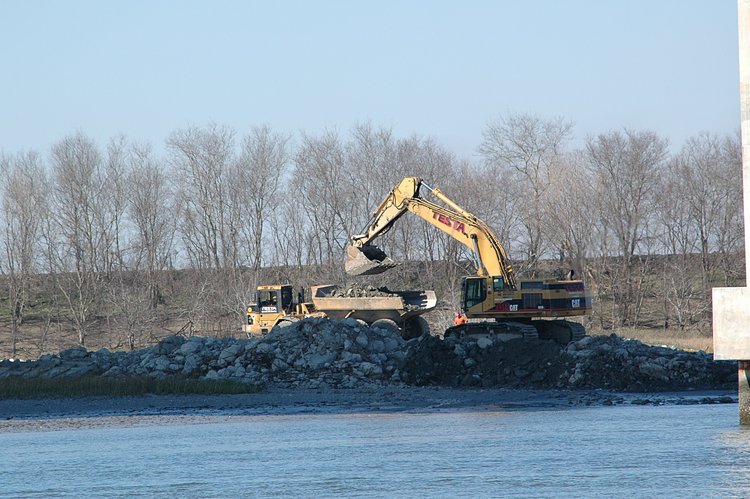 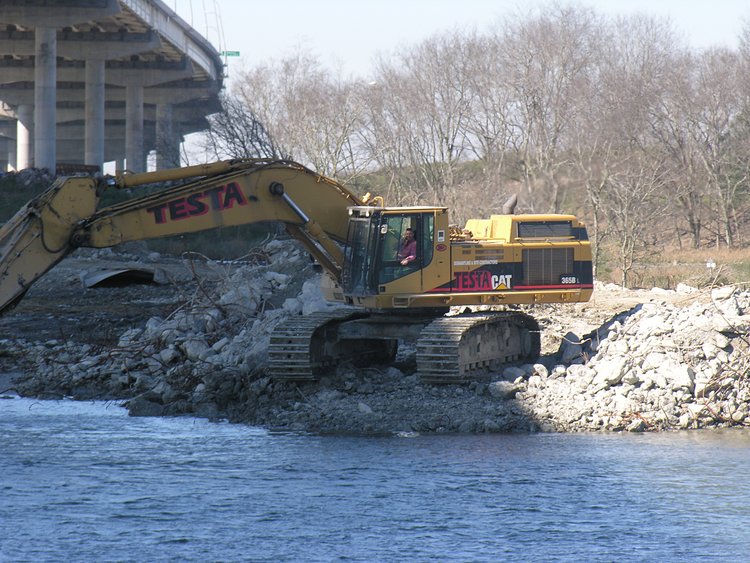 and again - This is for Tina 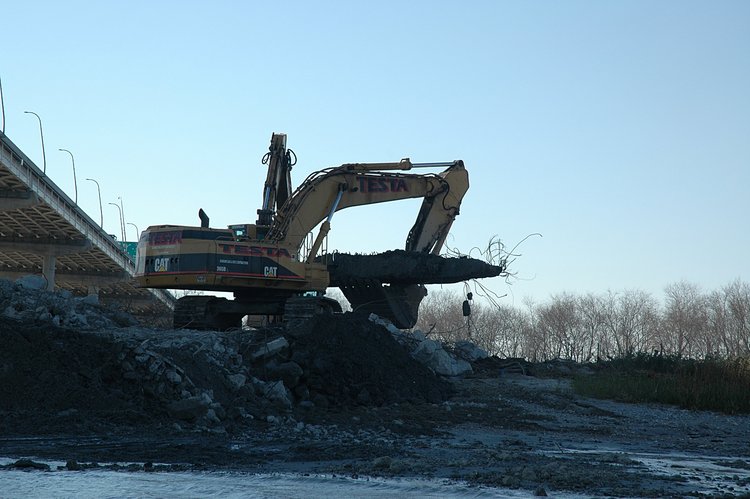 and Jim Grier wanting to know why I had been avoiding him and his Drum island team. - Sorry, Jim - my bad 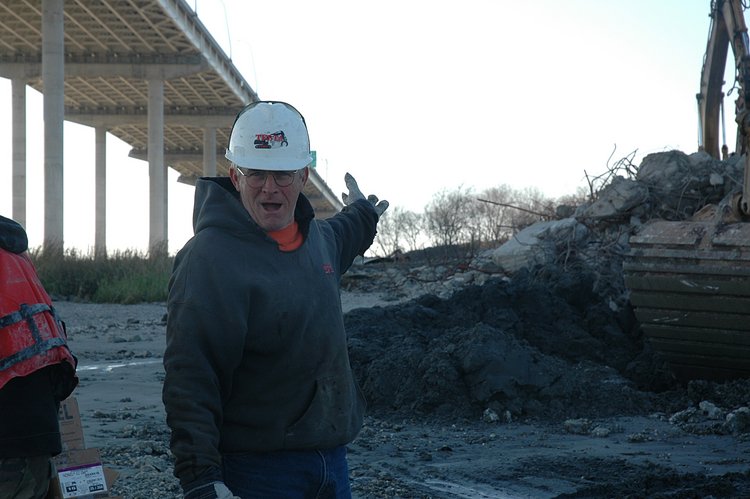