Home Meeting St East Bay Drum Island Mt. PLeasant Pearman Stories Grace Stories Implosions Enginnering Insights Stories of unbuilders Learning Links Bridge Video Bridge Blog Unbuilding Archive All Unbuilding Segments Building the Ravenel Bridge Photo Essays About me
January 1, 2006: Happy New Year and Sparky saves the day
I have been gone but Sparky got out yesterday and captured the blue sky and progress to date. When last seen, we described Mickey's group dropping Pearman supports M1 - M5. Much has happened since then even with the holidays. Bob McCabe's group (Scotty, Jack and Ted (from Michigan) the concrete cutter, not Tad from Boston) has removed virtually all the Pearman ramp while Chris picked the girders, Jack ate them and Scotty hauled them off. Not to be outdone, Pio's group has been eating away at the Grace roadway with Richie, Brad, Speedy and Steve, the concrete cutter. They are now past the midpoint of the Cooper River ship channel on the Mt Pleasant side. 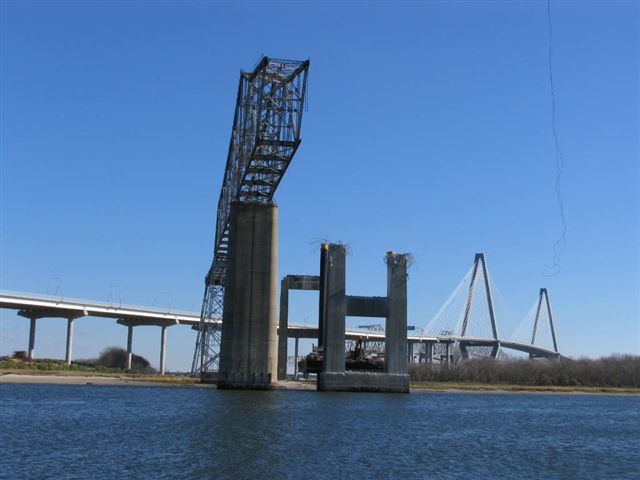 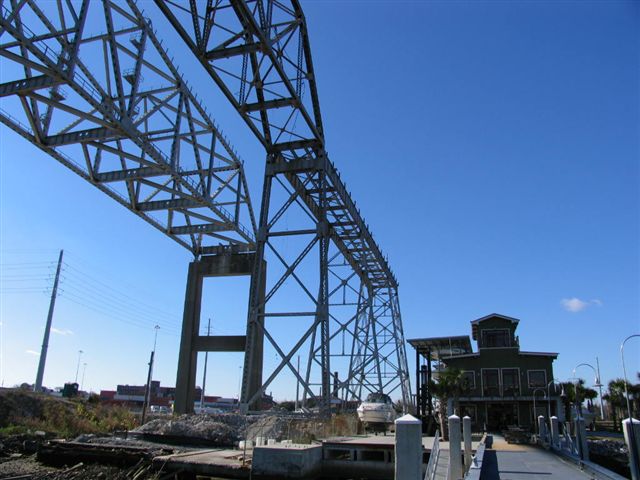 From Drum Island - the Grace skeleton on the left, the D-25 base of a Pearman support and a couple of Pearman supports stripped clean of floor girders. 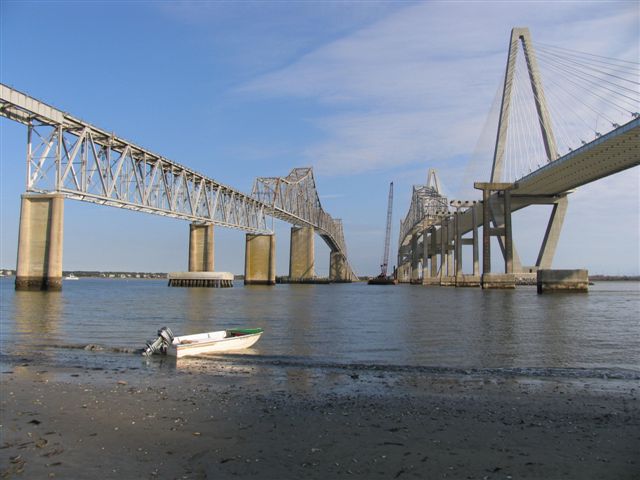 The Grace from Drum Island 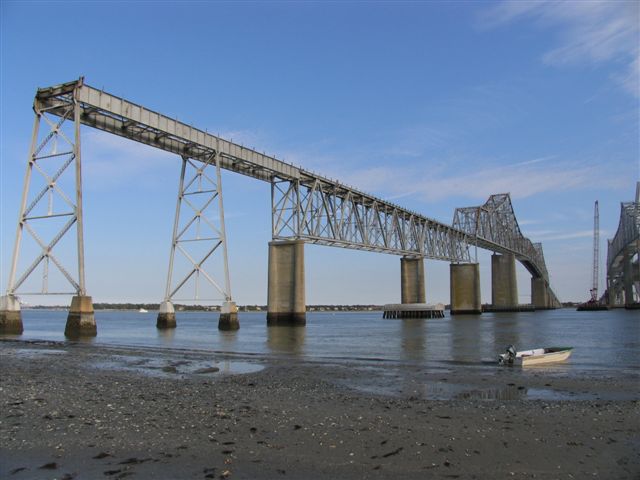 A closer look at the Pearman cantilever support on the right - with all floor girders picked. To the left, you can see the remaining Grace roadway (dark stripe in the middle of the truss) remaining to be removed. Pio and his team are beyond the midpoint of the Grace channel span. 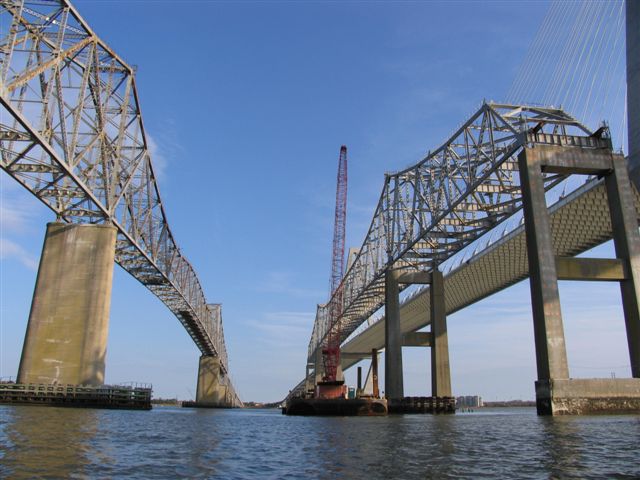 Looking under the Ravenel Bridge - only Pearman ramp supports remain and beyond, the Grace on-ramp 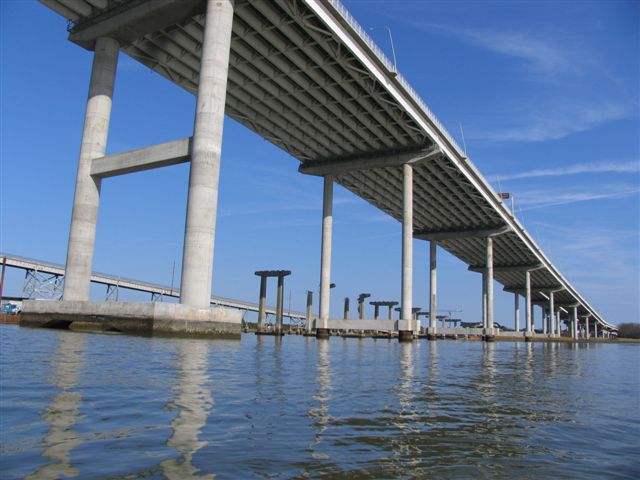 Looking along the northern edge of the Ravenel towards Mt. Pleasant. You can see where the supports are slowly being eaten away starting at the pier cap and working down. A combination of a 350 hammer working from the elevated jack-up barge and using Michael's 1250 on a water-level barge. 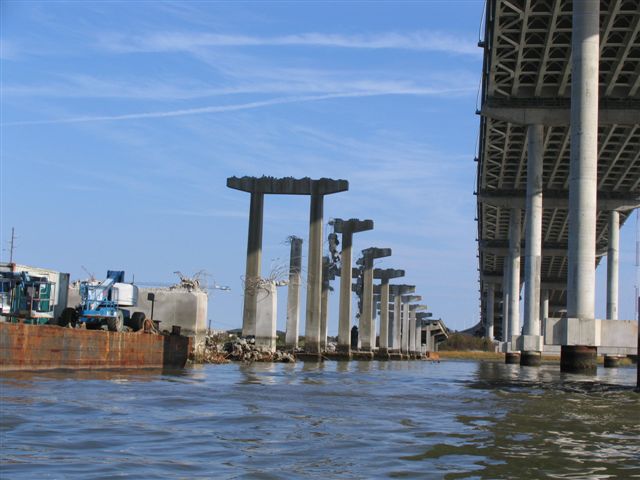 Looking north under the Ravenel Bridge, some nice reflections and the roots of Pearman supports M1 - M5 remain and the Grace on-ramp 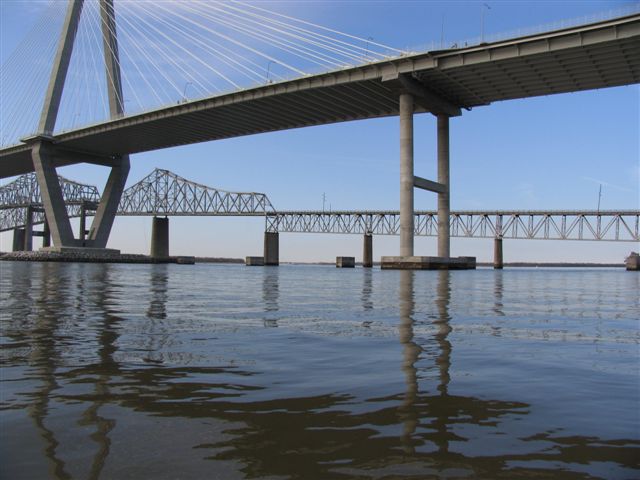 and a view of the cantilever and main span segments of the Pearman and Grace skeletons. If you have your curious eyes activated, you can see that Pio's group has cleared the roadway up to the right edge of the west Ravenel pylon. 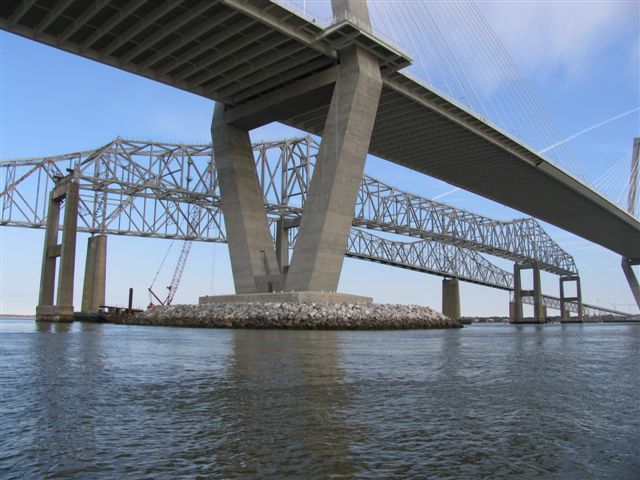