There is an interesting challenge with removing the Pearman roadway. Initially the plan was to use the jack hammer to drop segments of roadway into the water and then later removed. However Bob McCabe 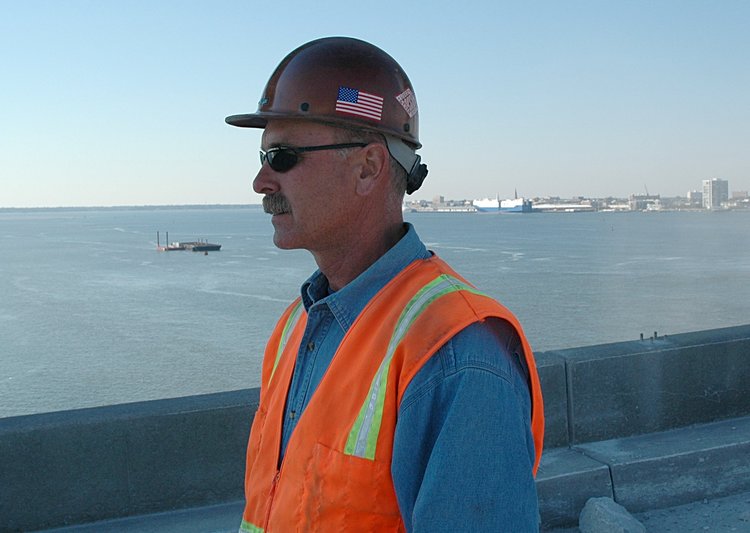 and his team worked out a clever alternative. Instead of hammering all the roadway, only lines of roadway overlaying the steel girders are hammered, thus exposing the embedded rebar. Then a perpendicular line is hammered from one side of the roadway to the other, thus outlining a 1/4th width bite of roadway. The shear then cuts the rebar, lifts the segment up and then pushes it to the recycling pile. The end result is that only a very small fraction of the roadway falls into the water below - thus avoiding a large water recovery operation and minimizing environmental insults.

Here, the morning sun lights up the Ravenel Bridge and the Pearman worksite 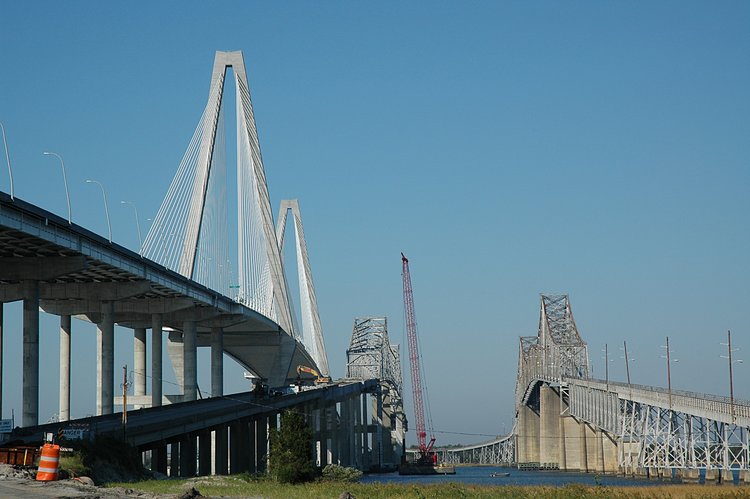 The is the setup as viewed from the Grace Bridge - the shear is beind the hammer which is drawing lines along the girder tops thus exposing the rebar for a segment of roadway. You can see Roy Delpriete hammering the roadway, sort of drawing a map for Kevin (in the shear behind) to follow. 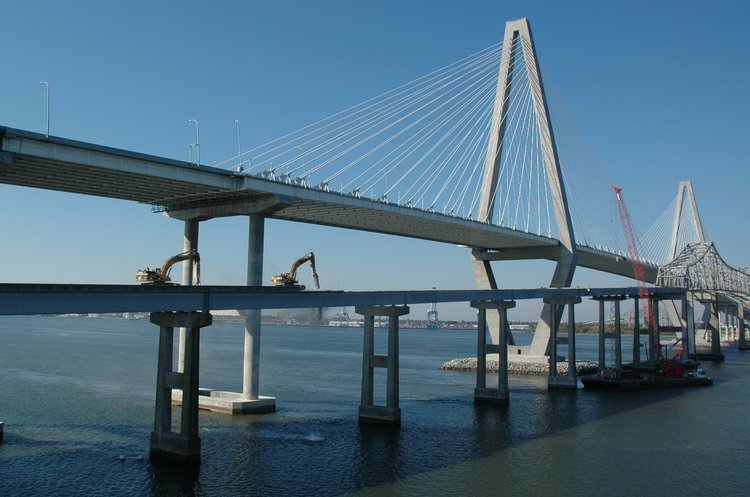 Here is a closer view of Roy is hammering a line along the girder, exposing the embedded rebar. 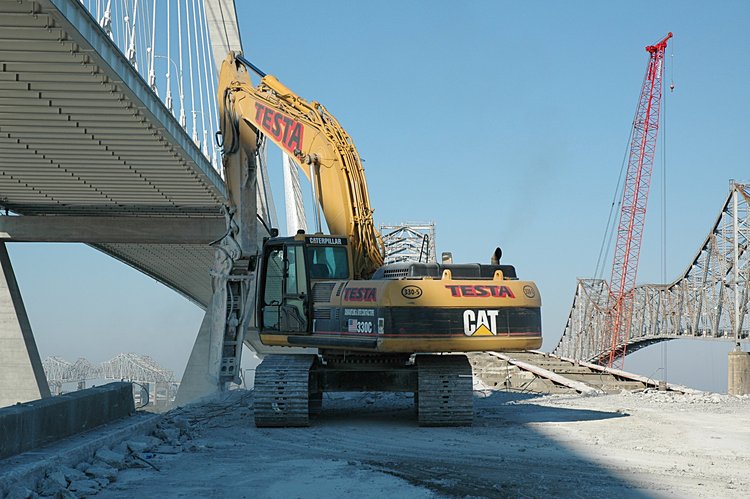 Beginning a line along the edge girder - 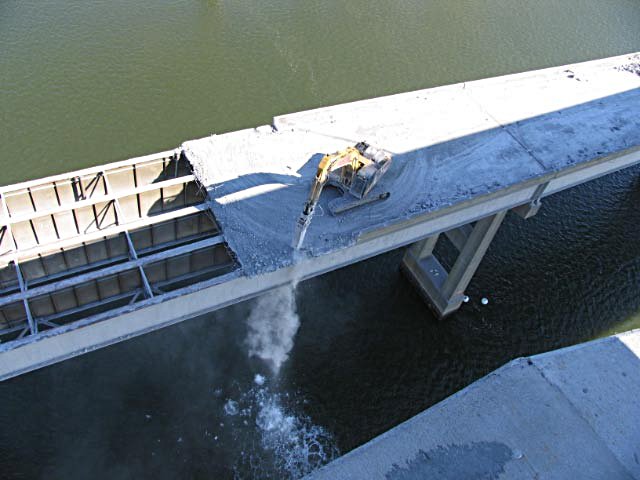 and then broadening the line, equal to the girder width. Note the exposed rebar to be cut by Kevin's shear. 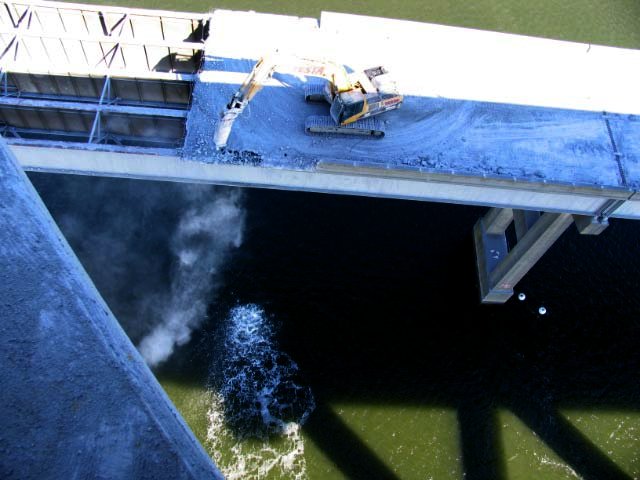 Next, exchanging the hammer for the scissors 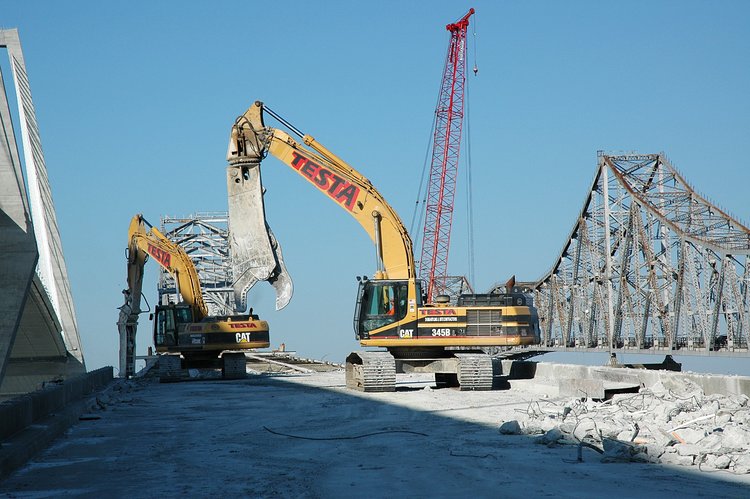 and then some rebar cutting 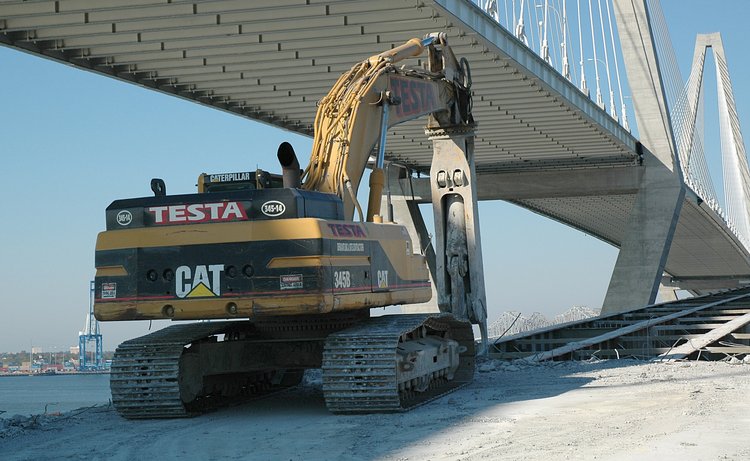 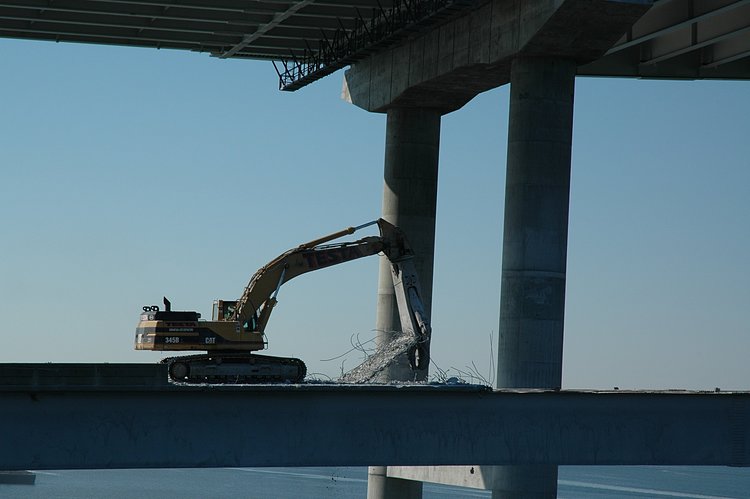 then rotating it upward 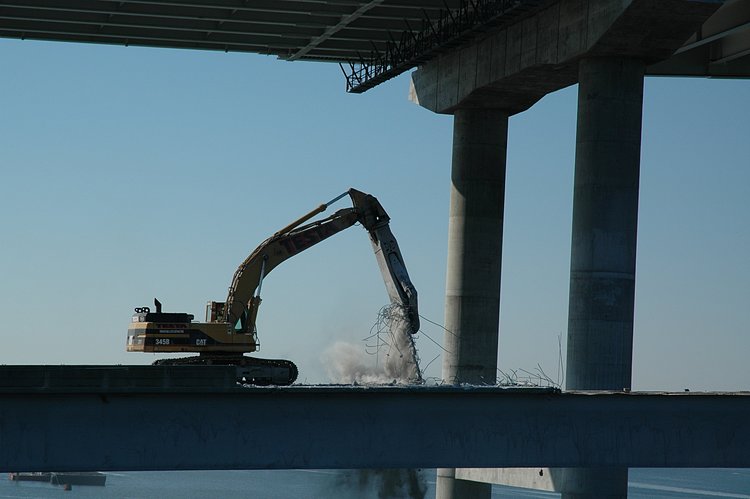 then pushing it toward the recycle pile 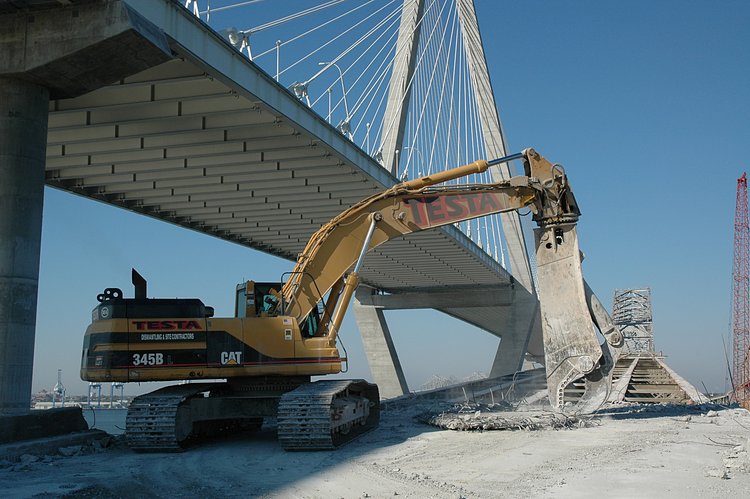 And here you can see the parallel girders and to the left, the gap left from the just removed 1/4th bite of roadway. 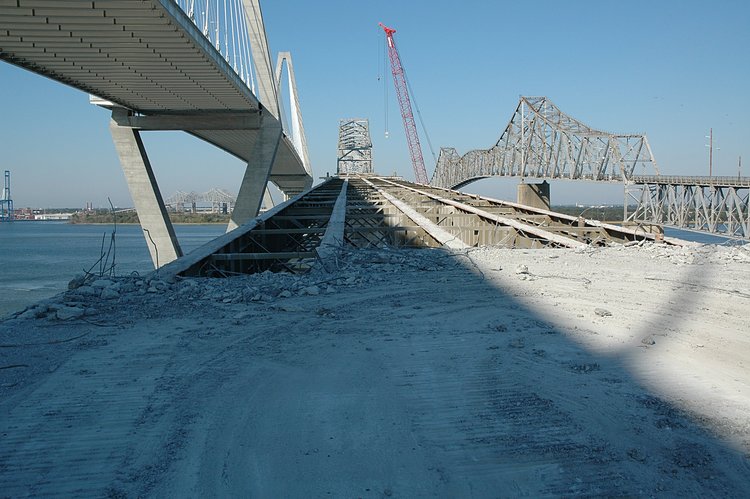 Meanwhile, Mickey Roger's guys are continuing to drill holes in the Pearman piers. 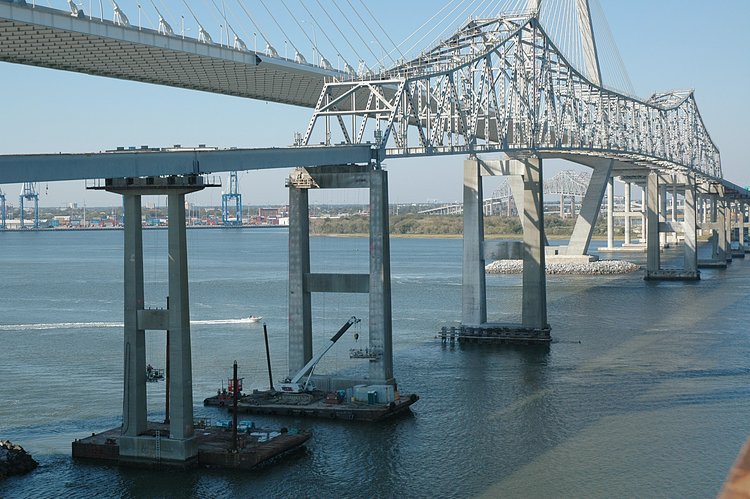 at the pier cap 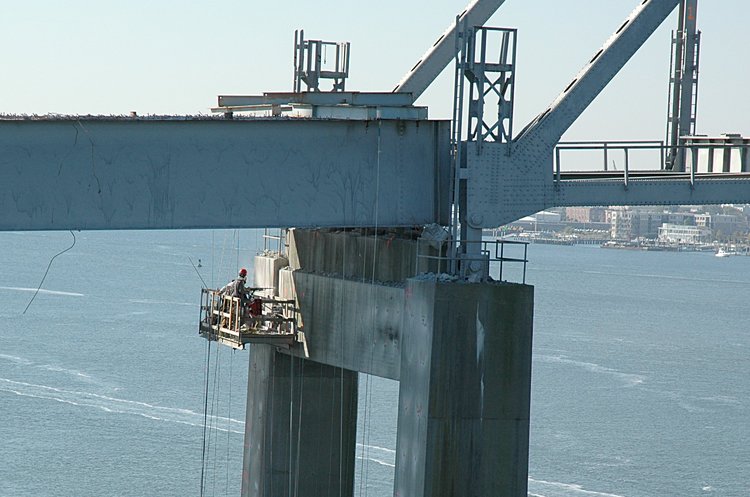 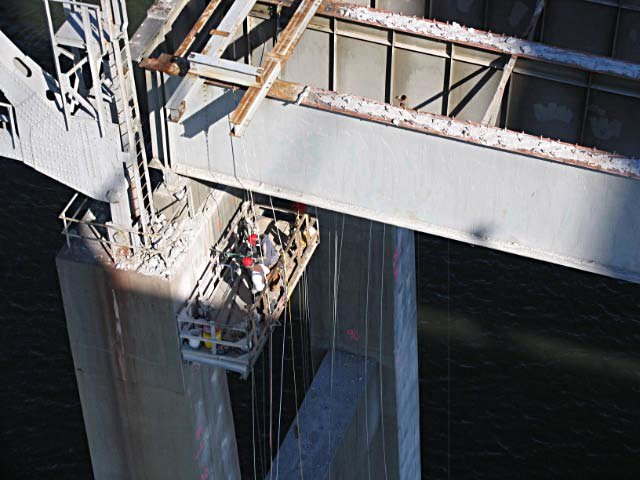 And toward Drum Island, nothing remains of Charleston's Stonehenge of Pearman support piers 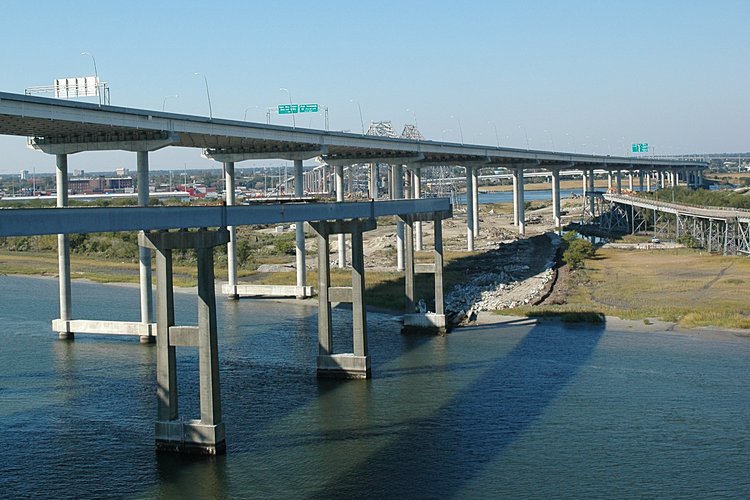